Wildlife, Winter Recreation, and the LRMP

Wildlife, Winter Recreation, and the LRMP

The Sea to Sky Land and Resource Management Plan

The Sea to Sky Land and Resource Management Plan is not just a guide for recreational use, but for general management of the Sea to Sky’s land. It includes designations around industrial use of the land (mining, logging, road and infrastructure development, etc), commercial use (tour operators, backcountry lodges, etc), and personal recreational use. The goals of the plan include managing recreational and other activities in a way that considers impacts on overall environmental values, that reduces or minimizes impacts to other resource values and that reduces conflict between various groups.

The History of the LRMP

The LRMP was created in two stages:

The WBRF was the main venue for public involvement in the plan. It included all relevant sectors (Including BC Snowmobile Federation, Outdoor Recreation Council, Federation of Mountain Clubs of BC, BC Heli and Snowcat Association, S2S Commercial Backcountry Recreation Association) and had sessions for public feedback. While the name includes ‘Whistler’, it is important to note that both Squamish and Pemberton stakeholders were included in the forum as well as Whistler.

The primary goal of the WBRF was to create a winter backcountry recreation plan that would balance the interests of and minimize the conflicts between motorized and non-motorized recreationalists. After the forum was completed, the main output was the ‘Winter Sharing Accord’ which was a document imputed for use in the LRMP (which was being developed at that time) and intended as guidance for balancing recreation needs between different user groups. For more information about the WBRF, click here.

After the release of the Winter Sharing Accord, BC and Sea to Sky government officials worked with the Líl̓wat, Skwxwú7mesh, Tsleil-Waututh, and In-SHUCK-ch First Nations to find the best way to designate land based on feedback from WBRF and on needs and interests of First Nations on whose traditional territory we are all recreating.

According to the creators of the LRMP, “The Sea-to-Sky Land and Resource Management Plan (LRMP) process was undertaken to provide greater certainty for local economic development and the long-term sustainability of ecological, social and cultural values. The plan was developed to balance the economic, environmental, and social interests within the Plan Area and considering a wider regional and provincial context.”

Where does the wildlife actually live?

The map below shows which zones have been identified as important winter habitat for which Sea to Sky creatures. Note that the locations are approximate and represent zones that can vary in size, shape and use. 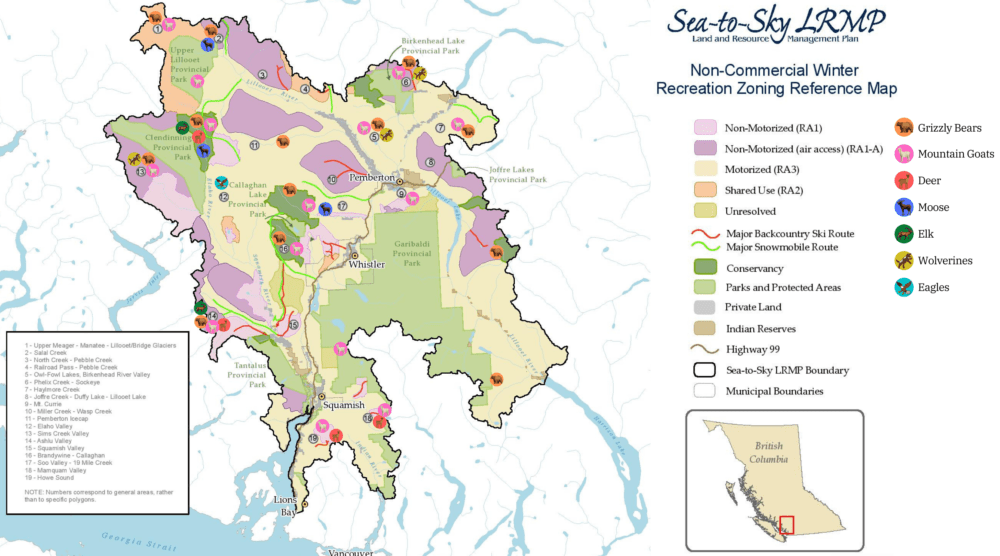 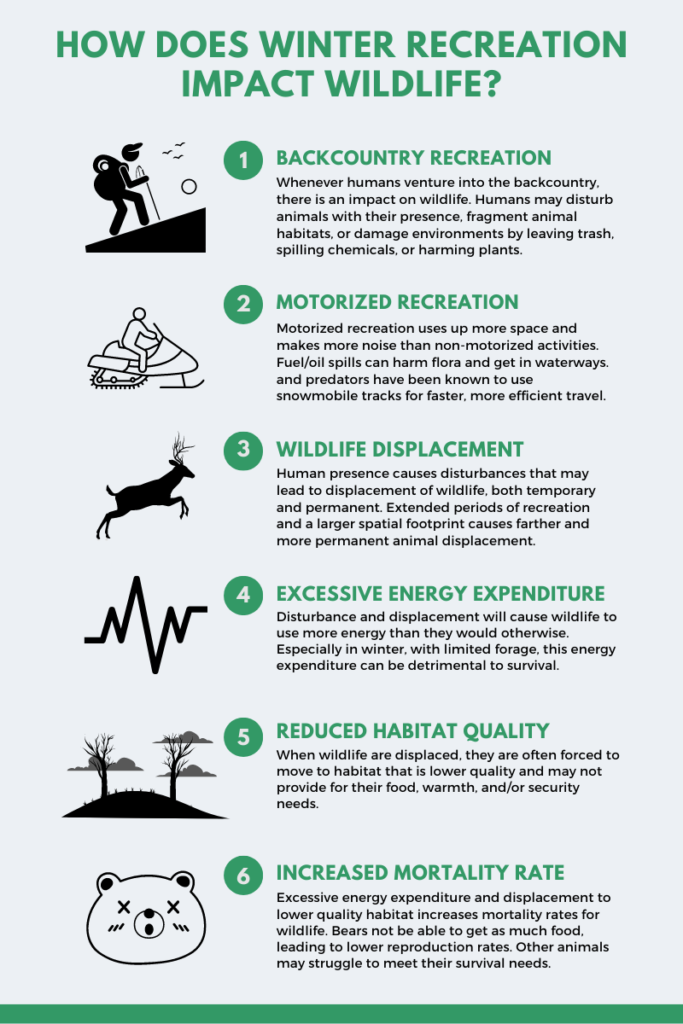 In winter, motorized recreation can have significant impacts on wintering wildlife, from deer to grizzly bears to mountain goats. According to the Environmental Risk Assessment done on this area in 2008, “frozen snowmobile trails can facilitate access of wolves and so increase predation rates. Animals may also be displaced from critical winter and spring habitat by snowmobiles and helicopters (particularly grizzly bears, mountain goats and wolverines).” (Holt & Hamilton)

For Grizzly Bears, winter displacement can be caused due to excessive noise disturbance while in the den. Loud motor sports will disturb a bear’s hibernation (despite popular belief, they are actually pretty light sleepers) causing them to potentially abandon their den and waste energy or to be disturbed during gestation and lactation within the den, which are crucial to cub survival. (for more on Grizzlies, click here)

What do the Different Designations Mean on the LRMP?

RA1 (non-motorized use) is defined as: Self propelled activities that do not rely on a motorized vehicle for access or recreation use within a designated zone (such as backcountry skiing, ski touring / mountaineering, cross-country / nordic skiing, dogsledding, snowshoeing). Only non-motorized transport may be used to access these areas.

RA1-A (Non-motorized use with air access) is defined as: Self propelled activities that do not rely on a motorized vehicle for recreation use within a designated zone (such as those listed above), but aerial transport is allowed for drop off / pick-up of day use or multi-day recreation users.

This means that helicopters are allowed for the drop-off and/or pick-up of backcountry users only. They cannot provide a traditional heli-skiing operation or other operation that includes multiple laps or usages of a certain zone in a day.

The Wildland designations are a new designation introduced with the LRMP. They have been identified to recognize First Nations culture and heritage values, wildlife habitat values, beautiful scenery and healthy ecosystems, old-growth forest stands, alpine lakes, backcountry recreation value (e.g. huts or trails), backcountry tourism potential, and proximity to existing parks. Their management objective is “To retain the remote character of the Zone and associated high quality of wilderness experience for First Nations cultural uses and commercial and non-commercial backcountry recreation.”(British Columbia)

Wildland Zones are each assigned a core emphasis to reflect their main ‘value.’

Within Wildland Zones, management directions include:

See Zone designations in the table below: