Celebrating 30 Years of Environmentalism In Whistler

2019 Marks the 30th Anniversary of AWARE

AWARE (the Association of Whistler Area Residents for the Environment) was founded by people who have an unyielding appreciation for nature. They turned their passion into purpose when AWARE was incorporated under the society act on August 4, 1989.

To celebrate this milestone, a compilation of historical highlights and hopes for the future was captured in a 30th Anniversary Book, and a Community Celebration was held on Earth Day 2019. 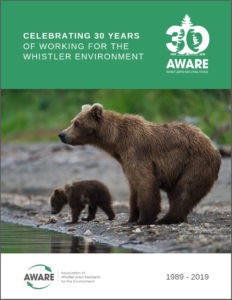 Delve into the history of environmentalism in Whistler and the Sea to Sky Corridor in this brief 30th Anniversary Book. The book highlights milestone moments that shaped this area’s natural environment; a map showcasing lasting legacies on the landscape; an outline of the major changes the organization underwent to grow impact; an overview of today’s programming and advocacy work influence; and a glimpse at the key issues facing our community today and into the future.

View the 30th Anniversary Book as a PDF here

A Special Keepsake for AWARE Members

As a thank you to AWARE’s current annual and lifetime members we are offering a limited edition commemorative poster.  Designed by local graphic designer and AWARE Board Member, Kim Maitland, the 11″ x 17″ poster features a grizzly bear amongst the forested Whistler mountainous landscape. To get your copy, please purchase or renew your AWARE membership, then email info@awarewhistler.org to arrange pick-up. 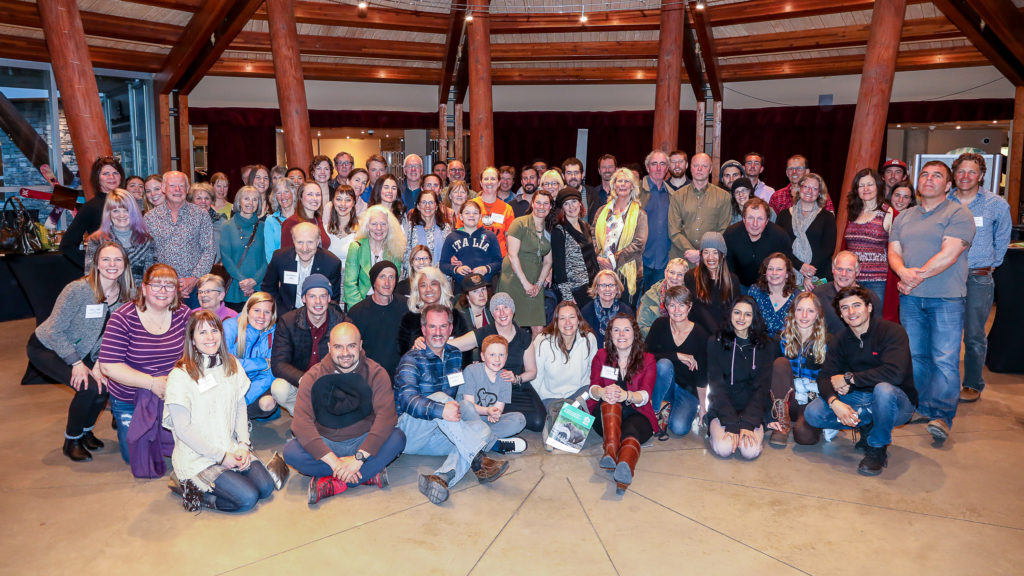 Taking The Time To Celebrate

Stories from the Past // Hopes for the Future

Over 120 community members – past directors, members, volunteers, funders, and keen newcomers –  gathered at the Squamish Lil’wat Cultural Centre to celebrate 30 years of environmentalism in Whistler on Monday, April 22, 2019 (Earth Day). The evening’s main goal was to create a space to share stories and connect. Past directors shared stories from the last three decades including Ken Melamed, Stephane Perron, Mitch Rhodes, Brad Kasselman, Tina Symko, and Sara Jennings. As an added bonus, the evening’s silent auction raised over $4,000 to go towards AWARE programs which is important because there still a lot of work to do!

Thank you to all those who renewed memberships, donated, contributed to the silent auction, attended, presented and volunteered and special thanks to the Squamish Lil’wat Cultural Centre for hosting us in their beautiful space.

In the style of Dr. Seuss, Tina Symko told the tale of AWARE aged 30 years: 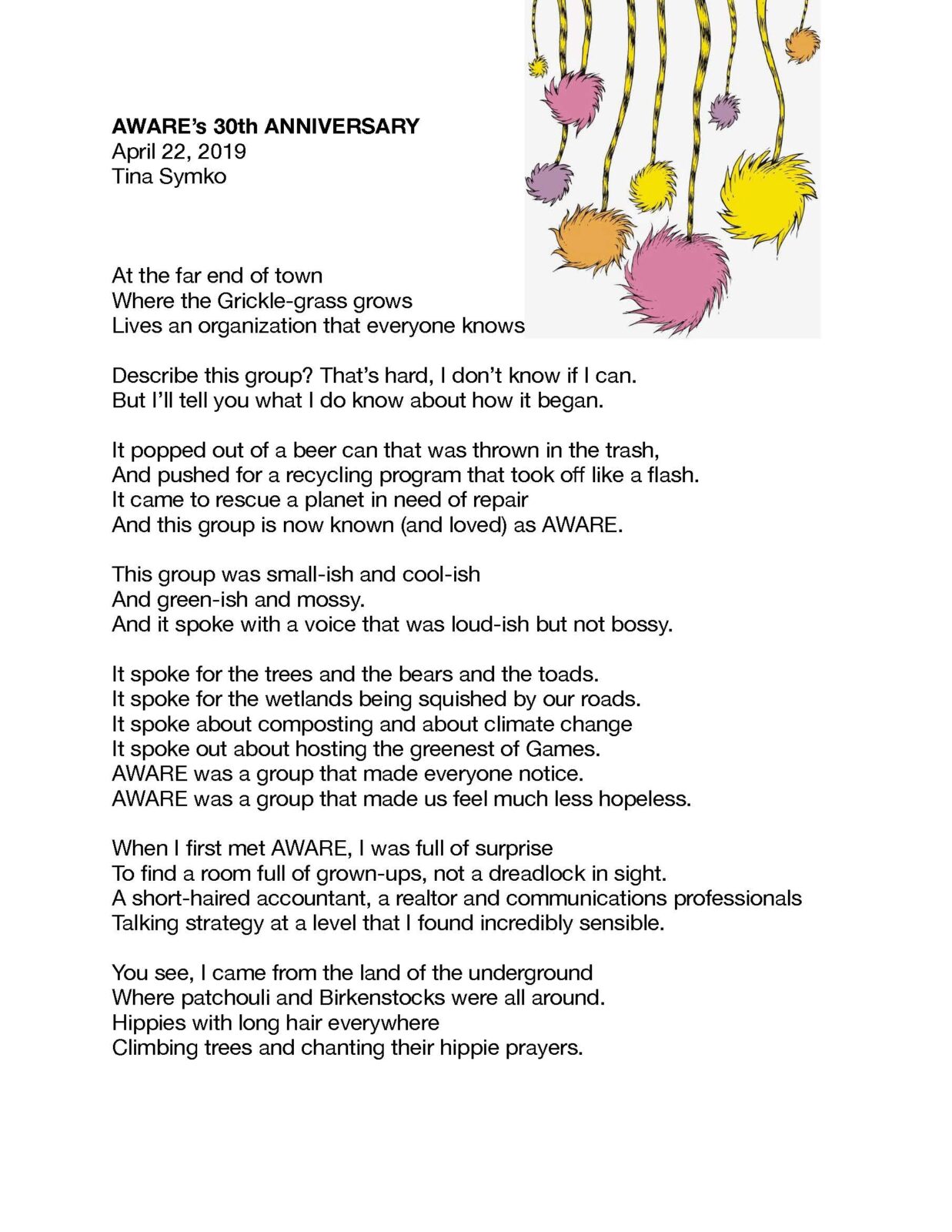 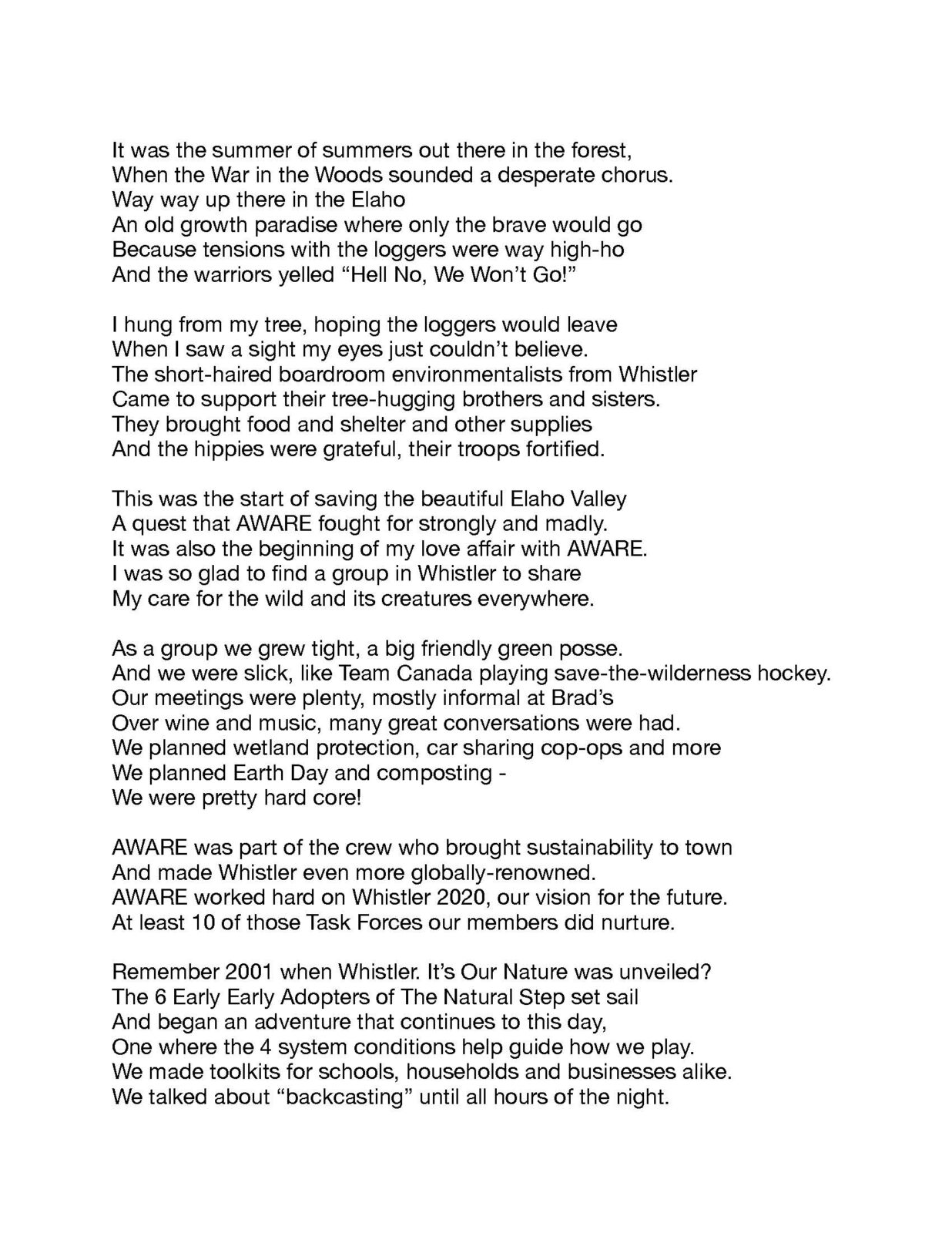 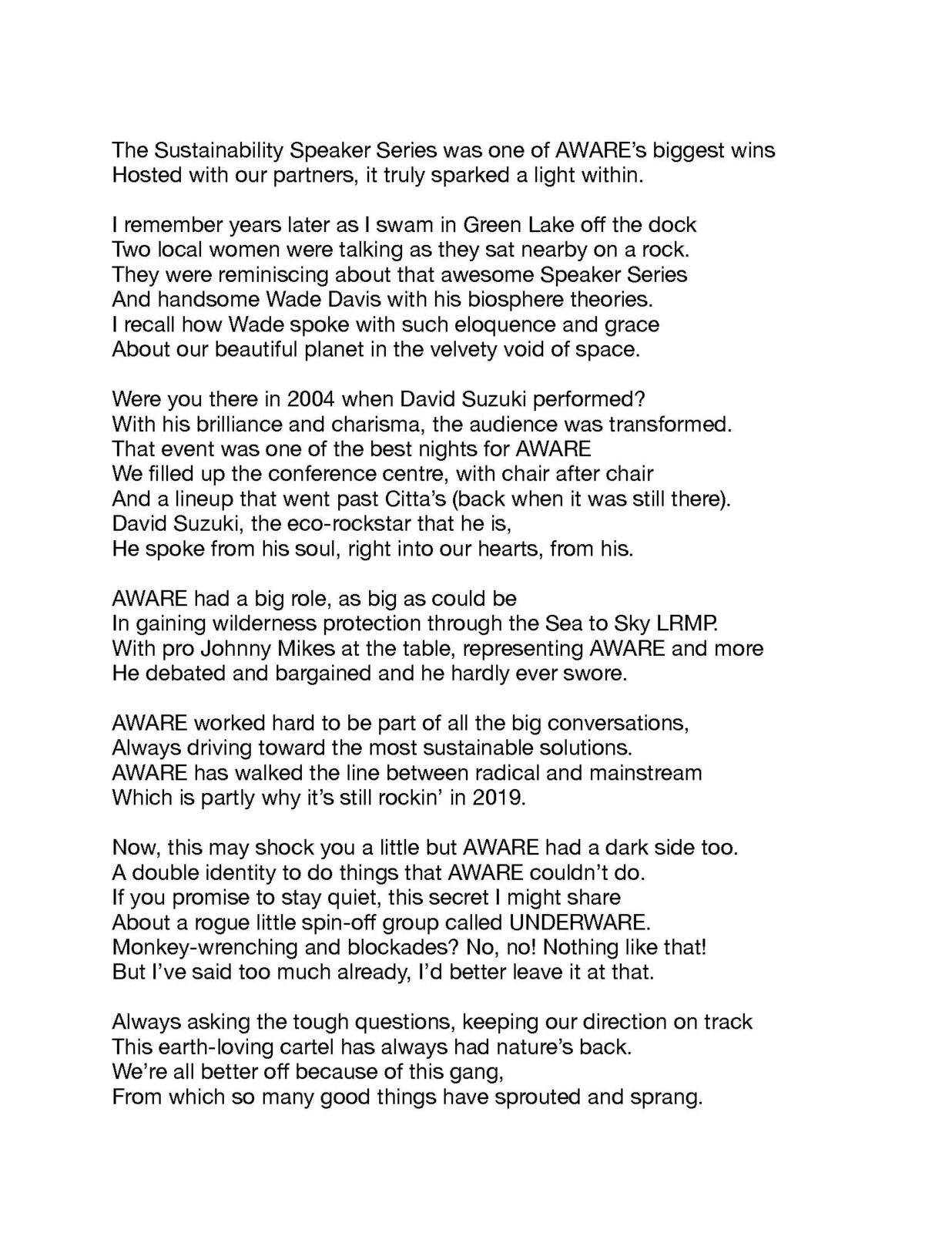 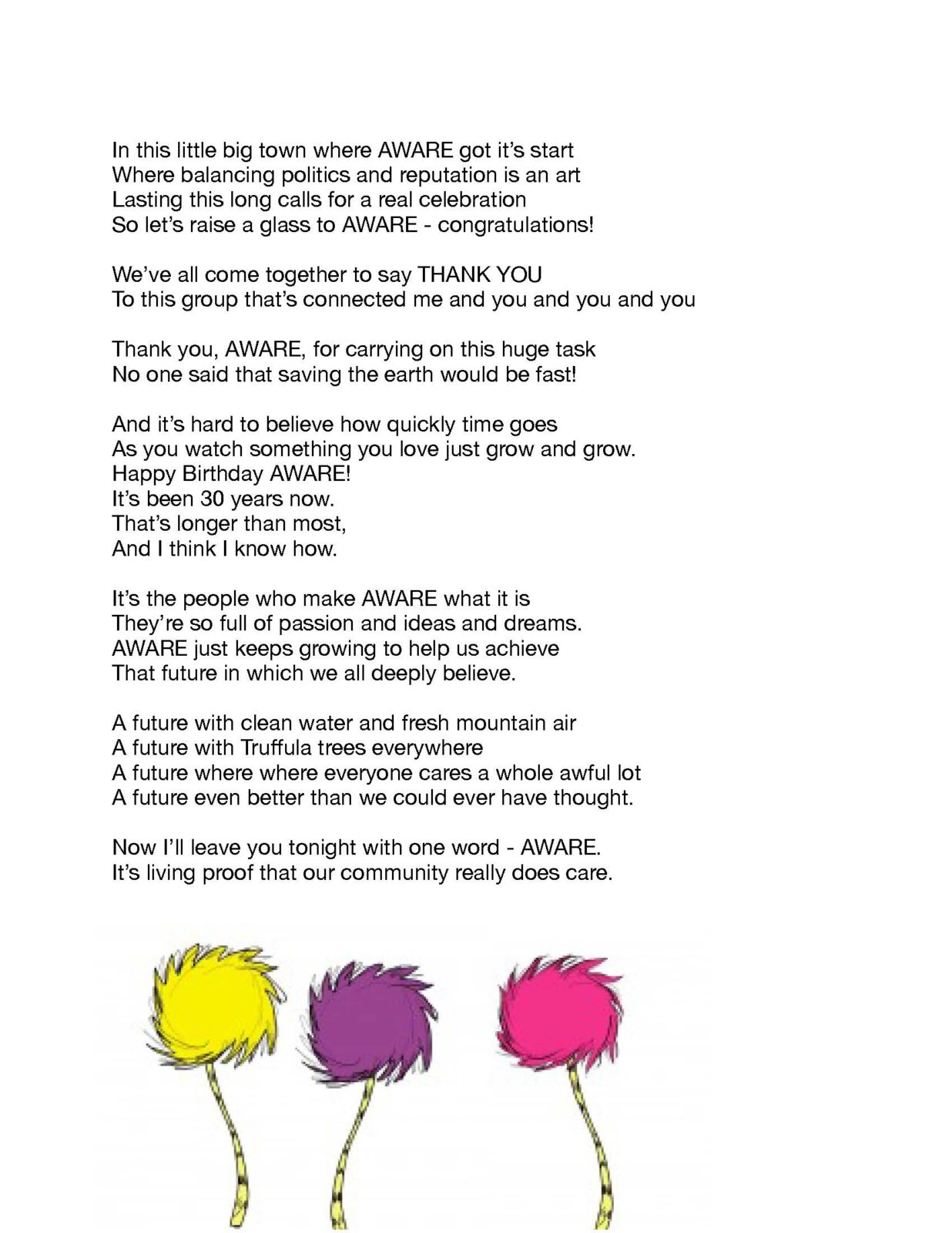 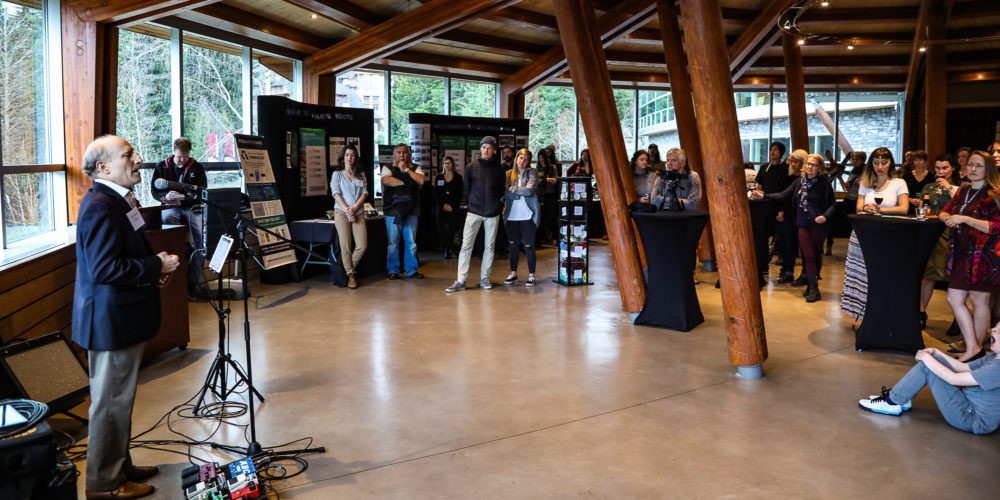 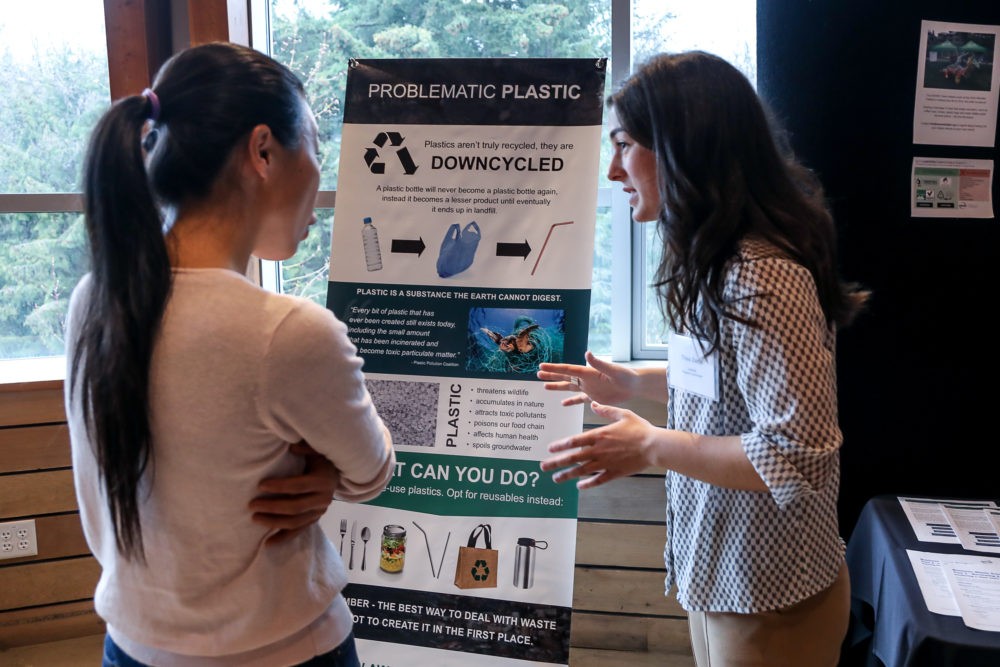 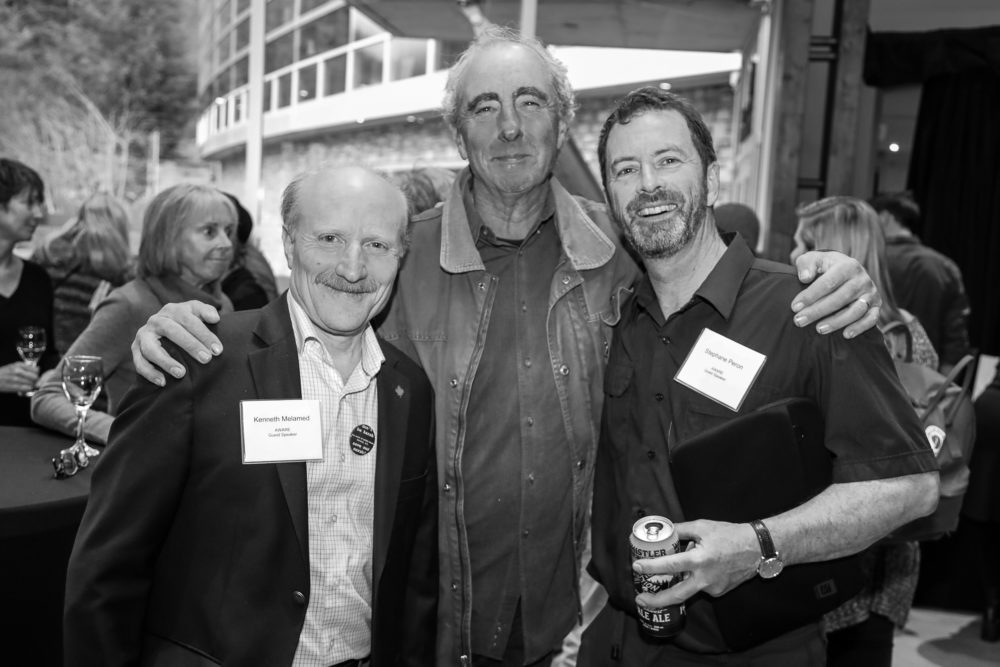 Get Involved with AWARE today